Environmental enrichment, and why it’s a good thing. Part 1: the stabled horse

Environmental enrichment is the improvement of an animal’s environment, physically, socially, or both. It is 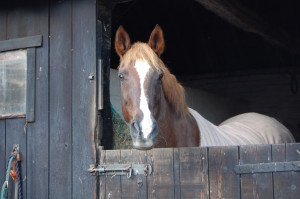 currently a hot topic in agriculture and zoos as a means of decreasing stress and – in farm animals – increasing productivity, and is beginning to make inroads in horse-keeping in various ways. At its best it results in a real improvement in welfare, allowing the animal scope to express its natural behaviours, resulting in a reduction in both stress and the expression of stereotypies (in the horse world, commonly called vices) and potentially improving both health and behaviour.
Many owners come across forms of environmental enrichment when their horse is confined to his stable for health reasons – ‘box rest’ – or because field turnout is limited for one reason or another. In an effort to reduce boredom and the likelihood of unwanted behaviours, those caring for stabled horses can provide stable toys, to provide distraction; mirrors, to alleviate loneliness; and food presented in such a wa y as to make its consumption a time-consuming test for the horse – such as a swede hung on a rope, a treat ball, or ‘trickle’ feeders of various sorts. Time spent with the horse grooming, scratching or otherwise engaging with him will also act to break up the horse’s day and provide stimulation.
But environmental enrichment need not merely be a product of necessity. The horse of today, in general, receives less exercise and stimulation than ever before. He is not out of his stable working for much of the day, as horses once were. And now hacking opportunities are restricted by ever-busier roads, so exercise often takes place in small arenas; and, increasingly, environments are often relatively sterile, with monocultural pastures enclosed in electric fencing and a large proportion of the day spent stabled or in individual paddocks, with no direct contact with other equines. There is real scope, therefore, to improve horses’ environments in ways that will benefit horses and provide pleasure and satisfaction to their owners and carers.
Stabled horses and box rest
Where a horse has to be stabled, for whatever reason, there are, as mentioned above, a variety of ways in which the experience can be improved. Unless restriction is absolutely necessary, the first port of call should be ad lib forage. Not only does the horse have a psychological need to chew for large portions of each day, he produces stomach acid continuously and therefore needs a ‘buffer’ of fibre in the stomach at all times to reduce acid splash onto the 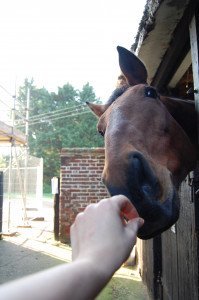 sensitive upper portion of the stomach. Without this, gastric ulcers can easily develop.
Some of this fibre can be provided in ways that make the horse ‘work’ for it, partially mimicking foraging behaviours such as picking choice morsels from a prickly plant, for example. Small-holed haynets can also eke out limited forage, if restriction is necessary. Treat balls filled with high-fibre nuts or root vegetables hanging from a rope can keep the horse occupied while providing roughage in small ‘doses’, although some horses can find these more frustrating than satisfying – so careful judgement is needed over their use.
Horses are herd animals who can often feel vulnerable when alone, so it is not surprising that some find it hard to settle when stabled. There are several ways of making their time in their stable more bearable. For those that want company, particularly if they are stabled when the rest of the yard is turned out, a stable mirror may be helpful. Make sure that it is non-shatter and set at a height comfortable for the horse’s resting head carriage. However also be aware that some horses may feel threatened by the mirror, so only use one if your horse is comfortable with it.  If adjacent stables are occupied a grill set in the intervening walls can be very helpful in making the horse feel part of a herd. A rare few horses may feel, however, that a neighbour is too close; these horses need a way of getting away from their neighbours so that they can relax, so any grills may need at least partial covering with, for instance, a substantial piece of board.
Natural behaviours are necessarily limited by stabling. Mutual grooming is generally impossible, and it is hard for the horse to find suitable surfaces to scratch his itches – at least surfaces that don’t damage his coat or rugs. There are options here, too, to make life more interesting and fulfilling. A simple stiff broomhead screwed to a wall provides a place to scratch; several, at different levels, or of different consistencies, provide choice. Purpose-designed rubber or plastic scratching mats are also available. Most horses quickly work out the purpose of these and make good use of them. All of these options mean that an itchy horse is less likely to damage himself or his rugs while trying to relieve an itch on a flat surface.
All horses need the occasional scratch, but not all are tempted by stable toys. Some, though, are natu 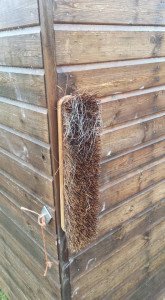 rally curious and will play with and perhaps destroy anything within their reach. It’s sensible to reduce stable fixtures and fittings to a minimum, so that the horse can’t hurt himself accidentally or wreck expensive kit, but unfair to keep such a horse without a means of stimulation or an outlet for his playfulness. All sorts of things can be stable toys – from an old feed trug to a rubber chicken to a purpose-made ‘playball’ – anything, in fact, that the horse can pick up, trample and fling about without losing an eye. Many purpose-made ‘boredom breakers’ involve a lick of some kind, but these are often packed with sugar, which can be undesirable, especially if the reason for the stabling is weight-reduction or laminitis.
From the point of view of welfare, one of the main problems with long-term stabling is the lack of choices that the horse has. While forage, places to scratch and toys help to pass the time and give the horse a small amount of autonomy, and company of a sort can be provided by mirrors and grills, the horse’s choices are still very limited. Matters can be improved, but at a cost, by the provision of ‘run-out pens’ – small individual outdoor areas attached to the stable. They don’t need to be large; something the same size as the attached stable is usually adequate. Most yards today aren’t laid out in a way that makes it easy to add these; but where there’s space, or where a new yard is being designed, they open up, quite literally, a new world for the stabled horse. He has the option of being in or out; he may have a different surface under his feet, which provides stimulation for his joints and feet; he can see more; and, if neighbouring stables have the same arrangement, he can socialise over the fence with his neighbour or, if he wants his own space, rest in his stable. A run-out pen also allows him to get away from one of the main problems with stables: the dust and ammonia from his bedding and excreta, which have a very detrimental effect on horses’ respiratory systems. During and immediately after mucking out, airborne dust in a stable is greatly increased, and a run-out pen provides a safe place to confine the horse until it has returned to a safer level. Once his habits are well-known, it also means that his feed and water can be placed away from the area in which he prefers to defecate, thus fulfilling his natural desire to leave his droppings behind him.
It’s important to remember that the horse has evolved to roam over wide areas daily, to interact with other horses at all times and to eat a variety of foods for a large proportion of every day. Stabling for our convenience or for veterinary reasons stops horses from carrying out these behaviours, so it is up to us to provide alternatives as best we can. And in doing so we can come to know our horses better and make both them and ourselves happier.

Next month: The enriched horse at pasture

This website uses cookies to improve your experience while you navigate through the website. Out of these, the cookies that are categorized as necessary are stored on your browser as they are essential for the working of basic functionalities of the website. We also use third-party cookies that help us analyze and understand how you use this website. These cookies will be stored in your browser only with your consent. You also have the option to opt-out of these cookies. But opting out of some of these cookies may affect your browsing experience.
Necessary Always Enabled
Necessary cookies are absolutely essential for the website to function properly. These cookies ensure basic functionalities and security features of the website, anonymously.
Functional
Functional cookies help to perform certain functionalities like sharing the content of the website on social media platforms, collect feedbacks, and other third-party features.
Performance
Performance cookies are used to understand and analyze the key performance indexes of the website which helps in delivering a better user experience for the visitors.
Analytics
Analytical cookies are used to understand how visitors interact with the website. These cookies help provide information on metrics the number of visitors, bounce rate, traffic source, etc.
Advertisement
Advertisement cookies are used to provide visitors with relevant ads and marketing campaigns. These cookies track visitors across websites and collect information to provide customized ads.
Others
Other uncategorized cookies are those that are being analyzed and have not been classified into a category as yet.
SAVE & ACCEPT